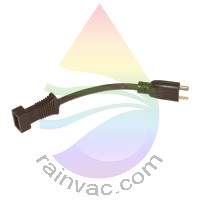 Conversion cord that will allow you to purchase a newer design power nozzle system and connect it to the older D3A, D2A, and late version D2 model Rainbows.

This conversion cord has a smaller two prong female end and a wider two prong male end. The wider male end does not have the center prong that was originally on three prong cords that came standard with R-1650A and R1024 power nozzles.

The center prong was a ground terminal and the newer power nozzles no longer need this grounding prong.

You have no items in your shopping cart.
Finance Options Secure Payments

There is no recently viewed product.


Our Customers Love Us...