Spider, SE, and Upgrade for D4 and D3 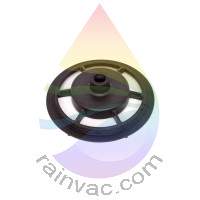 Discontinued
This item is Discontinued... there may be an alternative. Please contact us if you need assistance:

This item has had several upgrades over the years since it was first introduced with the Special Edition model D4C Rainbow.

It was originally a gray color matching the original separator. Then it changed to a yellow-tan color that matches the current R4100 separator. Then if finally was redesigned from the cone shape to what it looks like today. It was also at that time when it became black in color. No matter which version you have, this is a direct factory OEM replacement.

The spider sets under the separator and works directly with the separator. This spider and the R4100 separator was one of the upgrades that were done when the D4C Special Edition (SE) was introduced in 1990.

You have no items in your shopping cart.
Finance Options Secure Payments

There is no recently viewed product.

Our Customers Love Us...